My friend Trudie recently posted about hydro-power and it got me thinking about what has happened locally [and in my own experience] in regards to choices of green/clean power.

I live in a state that has long relied upon hydro-electric power. Grand Coulee Dam is Exhibit A, but there are quite a few dams on our big rivers here in the Pacific Northwest. Powering our cities with water seems like an easy choice, but there was sacrifice involved. The rivers are forever changed. Salmon can no longer follow their natural pathway “home” to spawn. People are displaced as well because the landscape itself changes when lakes are created and water is diverted to irrigate land — hundreds of thousands of acres of land.  I grew up thinking that dammed rivers are normal; the Native Americans who were forced to give up ancestral lands likely do not have the same viewpoint.

When I was younger, there was a big battle over adopting nuclear power. Folks wanted to remain with the status quo but a few years of drought and long lines at gas stations in the 1970’s forced people to think differently. In the end, 5 power plants  were planned in various places around Washington State. The project had many faults and detractors, but I suspect that the Three Mile Island accident (partial melt-down) in 1979 was the tolling of the bell regarding nuclear power for the masses in the PacNW. With the general public no longer willing to see nuclear power as the best choice, WPPSS (an acronym pronounced “whoops!” — not a good sign to begin with) eventually put an end to “clean power” progress at the Satsop plant and three others in Washington State; the projects were abandoned with only one facility completed, at Hanford. 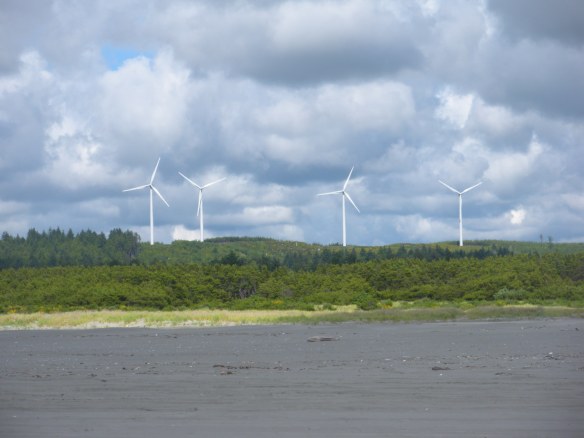 Windmills along the Washington coastline

These days, when I drive across Washington State, I see an abundance of wind farms.

Those who formerly lived in peaceful silence now hear the sound of air being sliced by humongous blades: whoop, whoop, whoop.

The landscape, which was once speckled with barns and houses and gently criss-crossed with roads, now is dotted with giant towers each sporting three huge blades.

Places that depended upon feeling remote or wild have lost that feeling. The local economy at large does not benefit; the power companies bring in their own workers instead of hiring local. True, the land owners have been paid for the use of their land (without monetary compensation, they surely would not have agreed to it) but the small town cafes remain devoid of the hoped-for extra business.

For size comparison, click to enlarge the picture and notice the line of traditional power lines on the hillside just above the trees and rooftops.

In the give-and-take of life, there will always be advances and losses. Sometimes, even the better choice isn’t a happy compromise.