I took another painting class recently and this was the result:

I thought it would look nice next to the collection of crosses I received from my dad. He’s a retired minister who collected crosses from antique stores for a few years. His wife had some of them in a framed display (not quite a shadow box) which looked quite lovely. A few years ago, after Dad entered an assisted living facility, he divided his collection up among all four of his kids and his wife mailed them to each of us for Christmas. I’ve been meaning to do a display of the crosses I was given but just hadn’t gotten around to it.

Now, however, I have an additional reason to get moving on displaying them all — we were offered a free used piano. The Scout’s piano teacher thought we would be a good home for it (she knew the person giving the piano away); I convinced my dh that this was a fine idea but none of us knew where we would put such a large musical instrument, so last month she came over and found the right place in our house. Then she gave us the man’s name and phone number, and a few days later was moving day. 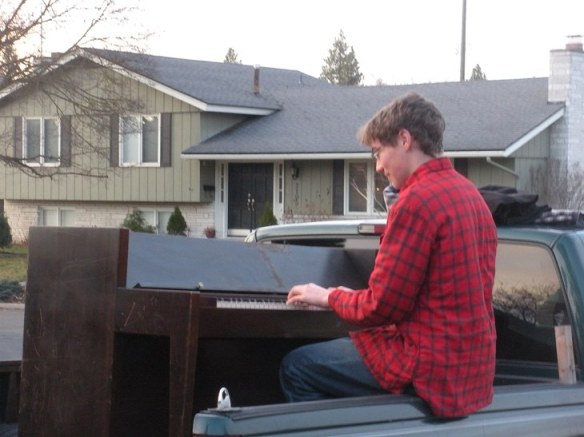 The Scout didn’t wait to move the piano into the house before playing it. 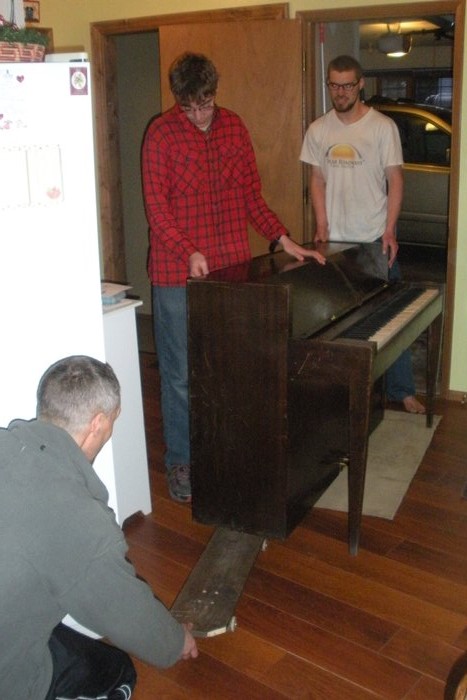 Where there’s a will, there’s a way — and sometimes that means using a homemade skateboard as a furniture dolly.

Adding a new piece of furniture meant rearranging sofas, chairs, lamps, tables, and pictures — which, honestly, is still happening because we can’t move anything just one time.  I got first shot at telling young men where specifically to place certain items. Then the next day SuperDad put them to work rearranging my arrangement of the furniture. Within 24 hours, I was moving the coffee table and recliner myself — not the smartest activity in which to indulge but when you can’t sleep at one o’clock in the morning, what else do you do?  That was how it all went for the first 4 days, before we moved on the placement of lamps and pictures. I’d go to work and come home to an arrangement that needs tweaking by me (but only when SuperDad was not there to see what I’d done to his plan). It’s now been a month since the arrival of a piano disrupted the living room furniture arrangement, and I fear that inertia has exerted its powerful force on the hanging of pictures.  I don’t really like where some any of them are placed but no one has the energy to move them (the flu hit 2 out of 4 of us… so far) and rearranging would probably mean more holes in the walls. And then we’d have to patch and paint walls! Of course, if we’d been really smart, we would have painted the walls before settling the sofas and chairs and piano into their new places, but simply agreeing where to put each of those rearranged furnishings was difficult enough. Plus it has been well documented that married couples have difficulty choosing paint colors.

The piano and piano bench are the only items of furniture which have not been moved at least twice since this photograph was taken.

At any rate, we have a new-to-us piano (the water damage might get partially covered by a table runner when I get back to sewing), a rearranged living room, and there will soon be a cross collection on display — if we can agree on where to put it.

Last Thursday was exactly four months since our storm of historic proportions, but there is still clean-up to be done.

Roads and roofs needed to be cleared of storm debris, but the work of removing the stumps and replacing sod will continue through the spring as homeowners find time, manpower and equipment, and money to deal with it all. 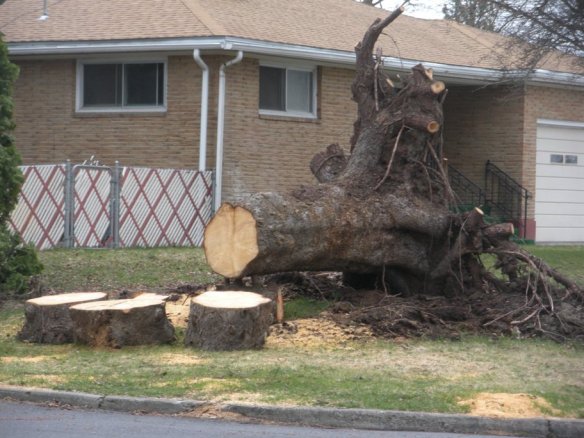 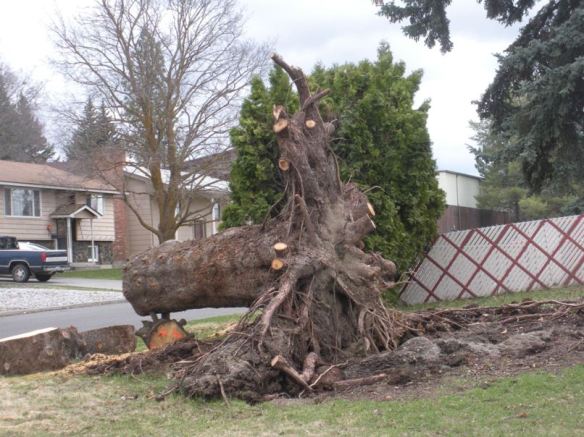 It’s hard to tell from this photo, but the residents can still enter the house from the front porch, as long as they duck just a little bit and keep to the far left. I’m guessing that they did not have insurance to cover the damage to the porch roof.

I really don’t know why some trees blew over and others were spared. Some neighborhoods definitely had more damage than others. Regular watering (sprinkler irrigation) probably played a part in aiding a shallow root system. But sometimes it all made little sense — for example, while our 3 large spruce trees remain standing tall, our next door neighbor had 2 trees leaning against his house by the end of that windy night.

The silver lining is a shed filled with wood curing for future winter warmth.

This sweet little guy, whose photo I took on Valentine’s Day in February of 2000, is now 16 years old and has been down on the couch with a virus this week.

Hopefully he’s back in action soon.

The Scout, before he was a Scout or a SnakeMaster, was a Kindergartner trying on SuperDad’s Kevlar helmet and bulletproof vest prior to deployment.       Photo taken October 2005.

…I stepped badly, slipped, and broke my ankle to smithereens.

It has not been an easy journey. Some nights I still have trouble sleeping from pain or discomfort, but these days there is less PAIN and it is more appropriately categorized as “discomfort.” I still hurt but semantics count when I’m searching for signs of progress.

More and more, I am seeing a light at the end of the tunnel — and I no longer am convinced it is the light of an oncoming train.

Such a handsome boy!

At least here is some color!

The Scout built a dog barn when Moses came to live with us — a dog house big enough for both boy and beast — but when the weather turned cold, our teen found himself sleeping out there alone; the dog preferred to sleep indoors in front of the pellet stove where it was warm. This was not a surprise to me since at his previous home Moses had also eschewed a dog house.

As our winter turns to spring, warm breezes call me outside and I hobble in answer to their call. However delightful the wind and weather may be (and it is, at least to me), I cannot abide a trashy backyard — which brings us back to the abandoned dog barn, a shelter without a roof since November’s big storm. 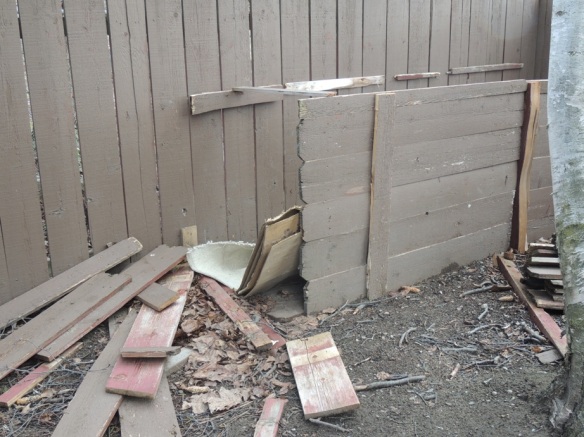 This afternoon, The Scout dismantled the remaining walls, threw away the torn and mildewed padding, and piled up the boards. 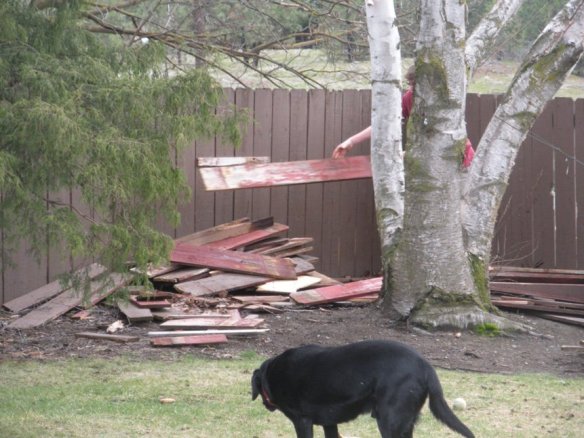 When I was a child, I spoke and thought and reasoned as a child. But when I grew up, I put away childish things.     – 1 Corinthians 13:11  New Living Translation (NLT)

Twenty-eight years ago, on Saturday the fifth of March, there were flowers and blown glass swans on top of a tiered cake. Family and friends wished us well as we drove off in an old pick-up truck in the rain. Together we have bought 11 vehicles, driven thousands upon thousands of miles, moved 11 times, purchased 3 different houses (and sold 2 of them),  and raised 4 children.

Today is also Saturday the fifth of March. We are expecting rain much of the day and I’m sure we’ll stay home, but it will be a day of quiet contentment. 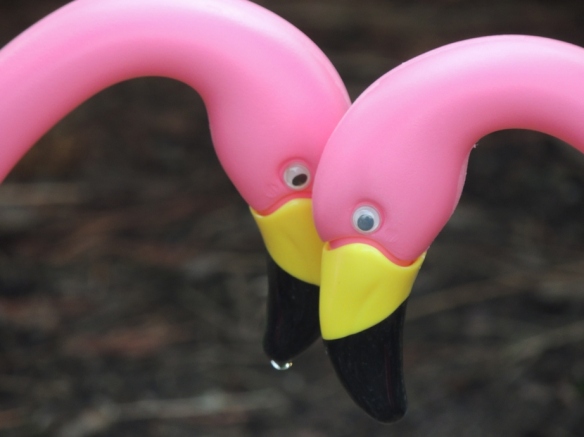 …but we continue growing together. 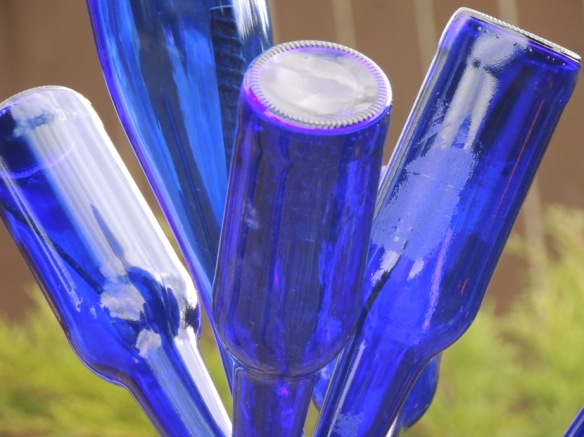 I can’t explain why I like my blue bottle tree so very much, but I can tell you that it makes my heart happy to look at it.

In Search of Sunshine